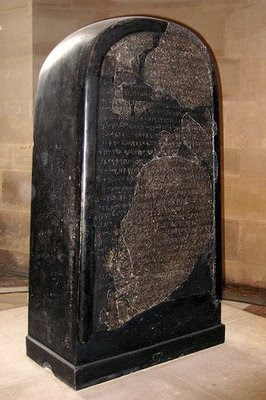 The Moabite Stone—Destroyed but Not Lost

THE Moabite, or Mesha, Stone was deliberately broken up within a year of its discovery in 1868. It was almost 3,000 years old. A piece of polished black basalt with a neatly rounded top, it was 44 inches high, [112 cm] 28 inches [71 cm] wide, and 14 inches [36 cm] thick. Some time after it was broken up, 2 large and 18 smaller fragments were recovered, but a third of the stone was irretrievably lost.

How was such an extraordinary artifact almost lost forever? And how valuable is it to students of the Bible?

F. A. Klein was the first and last European to see the stone in its unbroken state. It was lying among the ruins of Dibon to the northeast of the Dead Sea. He made some brief sketches of parts of the 35-line inscription within its raised border and, upon returning to Jerusalem, reported the find to his Prussian superior. The script was immediately identified as Phoenician and its importance recognized. The Royal Museum of Berlin put up money to buy the stone, but soon other interested parties were contending for it. Alerted to the value of their prize, the local sheikhs hid it and raised its price to ridiculous heights.

A French archaeologist managed to get a paper squeeze of the writing, but because the squeeze had to be snatched away before it was dry, the impression was barely legible. In the meantime, orders came from Damascus for the Bedouin to surrender their stone to government officials. Rather than comply, the Bedouin determined to destroy it. So they lit a fire around the precious relic and repeatedly doused it with water. When the stone fractured, the fragments were quickly distributed among local families to be placed in their granaries, ostensibly in order to ensure a blessing for their crops. It was also the best way for individuals to negotiate personally for the sale of the scattered fragments.

With the aid of plaster casts and paper pressings to augment the pieces that were purchased, the inscription on the stone was ultimately recovered. When the full text was revealed, scholars were astounded. The ancient stela was described at the time as “the most remarkable monolith that has ever been discovered.”

King Mesha of Moab erected the Moabite Stone to his god Chemosh to commemorate Mesha’s breaking of Israel’s domination, which, he says, had lasted 40 years and was allowed by Chemosh because he was “angry with his land.” This revolt of Moab is usually considered to be related to the events recorded in the third chapter of 2 Kings. On the monument, Mesha boasts of being very religious, of building cities and a highway, and of winning a victory over Israel. In this, he gives all credit to his god Chemosh. Mesha’s defeat and the sacrifice of his own son—reported in the Bible—are, as one would expect, omitted in this self-glorifying inscription.

Many locations listed by Mesha as places he captured are mentioned in the Bible, among them Medeba, Ataroth, Nebo, and Jahaz. Thus, the stone supports the accuracy of the Bible’s accounts. Outstanding, however, is Mesha’s use of the Tetragrammaton, YHWH, the name of Israel’s God, in the 18th line of the record. There Mesha brags: “I took from there [Nebo] the [vessels] of Yahweh, dragging them before Chemosh.” Outside of the Bible, this is probably the earliest record of the use of the divine name.

In 1873 the Moabite Stone was restored, with plaster casts of the missing text added, and put on exhibition in the Louvre museum, Paris, where it has remained. A facsimile can be seen in the British Museum, London. - April 15, 1990 Watchtower, WTB&TS
charlestrussell1914@msn.com
‹
›
Home
View web version